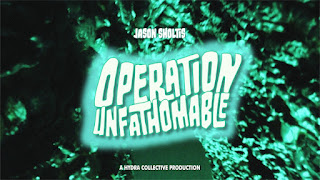 Started up a new campaign a couple weeks ago, and after a bunch of useless bellyaching and both hemming AND hawing I settled on doing a B/X thing using Old School Essentials and running Operation Unfathomable. (Mega spoilers ahead, fyi)

I gathered up my usual crew of players (-1 old gaming pal but +1 new gaming pal), and they wanted to do a funnel, DCC style, first. After making a up a bunch of level 0 dudes, they went through the Portal Under the Stars from the DCC core book and ended up with one survivor per player.

Our cast of characters is:
After being arrested by the Sorcerer-King Syantides, they're conscripted into service to descend into the underworld and retrieve the Nul-Rod, a powerful anti-magic artifact. To keep them in line, a grave (fake) curse is placed upon them. If they shirk their duties and fail to complete their goal, a blazing X on their foreheads will draw every bounty hunter in the realm to them. Along with them is Oothu, a soldier in Syantides' employ, sent as a guide. (I gave Oothu more of a minder role, sent to keep tabs on the adventurers, keep them on track, etc)

I'll cut to the chase, they breezed through OU. It has some incredibly dangerous stuff in it, that they either A, didn't even find, or B, hid from, or C, had bullshit incredible luck and avoided completely. (or actually got a benefit from)

So first off, they get to the entrance, do a bit of scouting, and get their bearings in the underworld. The first roll on the encounter table is a 20, and it brings a huge squad of the Worm Sultan Shaggath-Ka's worm soldier's and a worm priest. This is basically instant death for 3 level 1 characters and a super fucked up and not a fun thing to do right at the start of the adventure, so I nerfed it quite a bit and had the priest and soldiers be chasing some half unseen creature off the map of the module, and the ignored the adventurers cowering in fear under their fancy stone camouflage cloaks.

There's some more dicking around with some of the more minor underworld denizens or encounters, and they eventually make their way to the Science Fungoids in their research fungus garden. They Science Fungoids make their offer of unspecified possible rewards in exchange for the character's signatures on a waiver of liability form, and Klipse and Alejandro find this an irresistible offer. They both take a deep sniff of a weird mushroom, fail their saves and make a roll on the Bad Part of the Chart. Except not so bad?

Klipse finds his brain invaded by strange fungal growths and nodules and is forced to reroll his intelligence stat. Which comes out higher than before?? Fine, but now he's got a mushroom mind and is slow and he keeps wanting to find a pile of leaves or a rotting log.

Alejandro's skin breaks out in disgusting fungal warts, meaning he rolls a d6 and subtracts the result from charisma. He rolls a 1, so now he's got a 16 instead of a 17. Now he looks like Glenn Danzig with some acne scars I guess?

As thanks, the Fungoids give them a bag full of weird puffball mushrooms that may or may not be grenades, but are probably grenades, but no one knows what exactly they'll do.

They ask the Fungoids some questions, do a bit of exploring, fight some mind bats, listen to a bit of giant ape warrior poetry, find a bit of treasure, nothing major. Eventually, they come to a stone bridge over a riverbed overgrown with vegetation, and a strange man with two companions is also attempting to cross at the same time. He gives his name as Zabon Gormontine, a brave and honorable researcher from the future scouring the underworld in search of the Nul-Rod, the disappearance of which has caused untold destruction in the future. What a coincidence! Finding their aims aligned, they team up with Zabon.

They then come across The Oracle of the Bottomless pit, who gives them dumb answers about most things but finally gives them a vague clue about the location of the Nul-Rod, something about flies.

I'm skipping over a few encounters, either stuff they hid from, or underworld creatures so powerful, that a small party of surface realm dickheads were beneath their notice.

Briefly, they talk to the Fungoids, they get clued into a gross hive of nasty ass carrion flies, they find these flies, fight a couple, and eventually come across their quarry, the Nul-Rod itself! However, it's in the center of a city of super tiny little city of these Nanuit guys. 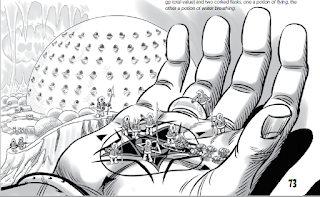 Cute! So, Zabon and his pals surge forward, trampling thousands of Nanuits and laying waste to their city Godzilla style. In the confusion, the adventurers try to stop Zabon, who brushes them aside with shocking strength! They draw their weapons, and order Zabon to stop, who ignores them, and initiative is rolled. During the battle, Zabon and his crew go wild and their true intentions are revealed, they're robots from the future who need the Nul-Rod to complete their project of destroying magic itself, and eventually all organic life! After a tough battle (a lucky puffball toss took out both robots in one hit), Zabon is defeated. After trying to use the Nul-Rod to remove the (fake) curse, they convince Oothu to leave the Nul-Rod here with the Nanuits, who believe it will cure them of their micro size and restore them to their tall glory.

And that's where we ended for the night. They still need to escape the underworld, which will be no easy task. But they've gotten through the bulk of the adventure stupidly easy. Or, they're just playing it right, and with the help of some luck, made it through pretty much unscathed.

I kinda want to do a more traditional dungeon so I'm thinking of reskinning something like Tomb of the Serpent Kings to be more weirdo underworld appropriate, and having the exit be at the end of that.